If bad things happen in threes, Carolyn Nikkanen is due for a bit of a break right about now. First there were her three marriages, one of which barely lasted a year, which floundered of the rocks of alcohol or incompatibility or some such thing. And then, starting in 1992, there was the first of three cancers. Those would see her lose first a breast, then her hair and then the body she had honed into optimum shape pre-cancer despite the birth of her two daughters, now 24 and 18.

Despite the hours of labour and the hard years that went in to building these, Nikkanen’s business card is modest, listing her as an agent/photographer. She moonlights snapping Sunshine Boys for the Toronto Sun and is a spokesperson for the Canadian Cancer Society. She volunteers with its Look Good, Feel Better program and was, for years, a single mother to her daughters.

She entered the business on the other side of the camera – as a model. She was dazzling. And she was three. It was a strange move, given that Nikkanen was raised in a strict Pentecostal household run by her grandparents after her parents split up. The faith instilled in her those years has never left her. She believes in and trusts not the new age, small `g’ god of the modern spiritual movement, but the real old-fashioned deal. She prays and believes it works. She makes no apologies for that.

But as for the strict Pentecostal abolition of niceties such as make-up, music and dancing – that didn’t stop her from getting before the camera as a tot and staying there, thank you very much. Today, at 46, she still models sometimes in fashion shows held as cancer research fundraisers.

The glamour may have begun early. But so did the work. Nikkanen remembers child model work as being long and dull, something in which the appearance of happiness meant as much or more than the real thing. As a child she worked through colds and fevers, smiling all the while. She managed to placate teachers, who didn’t at the time approve very much of her skipping school to make a shoot.

“We didn’t have a lot of money when I was younger.” She said. “My parents separated – there was a lot of stress. I was always sick.”

It sounds less than heavenly. Yet Nikkanen claims to have liked the work and she kept it up, eventually signing on to a famous agency. She was on her way.

Unlike many other models, she was always proactive, refusing to wait for anyone to call her up, going out and pounding on doors instead. And all the while she had her eye on a bigger prize. “I always saw myself having my own business,” recalled Nikkanen. “I always thought,`If this was my business, this is how I would do it.”

In time she did have her own shop to run.  And it was while she was struggling with it through the late `80’s, early `90’s recession, and while she was seeing her second marriage slide toward an inevitable dissolution, that she came face to face with her first bout with breast cancer. She was 35 and busy, racing through life and running the now defunct Mrs. Mississauga pageant.

“I found a lump in my breast the size of an egg. You could actually see it,” she said.

She went to her doctor, who thought she would be fine but ordered a mammogram anyway. She was not fine, and about a month later, she lost that breast to a mastectomy. “I felt I was in a movie watching myself.  The first thing you always say is `Why me?”’ said Nikkanen. “Then it’s `My God, my kids, I won’t see them grow up.” Then the brutally injured vanity pipes up. “And the other is `Who is ever going to love half a woman?”’ she said. “That’s the selfish part.”

At first she thought she would get reconstructive implant within six months. “Then I had the attitude that if a man didn’t love me as I was, who needs them,” said Nikkanen defiantly. But she did get that implant, and right about the six-month mark, as well. Before that, she had driven to the drug store to get an external implant to fill her bra while she went to work. The loose implant was a source of fun for her. Vacuuming her business at the end of the day it would pop out of her bra and plop on the floor. She’d promptly pick it up and lob it at someone. “Flying boob,” she’d call out.

Surgery over, new implant in place, life returned to normal. Until 1995, when the cancer returned, this time in her lymph nodes. “I thought that was game over,” said Nikkanen. It wasn’t. But treating it did require six months of chemotherapy. The resulting hair loss was worse than losing her breast for the woman who had made her living since childhood in a charged, appearance-oriented industry.

“I remember lying on the couch and pulling at my hair and coming out in handfuls,” said Nikkanen.

The chemotherapy did a number on her energy, leaving her tired and drained. It dotted canker sores along her tongue, mouth and throat so that it hurt to talk. “Walking across the road was an effort,” she said. “But I went to work every day.”

Soon, she rallied, again. She bought herself wigs and revealed in how little time it took to get herself ready and out the door. There was no shaving or waxing or plucking to worry about, no shampooing or blow-drying – just toss on a wig and go. In the hot summer months, she’d come home and yank the wig off, letting the coolness settle on her hare skin. There were bad moments, of course, moments of fear and despair. But she got through them. A year after the chemotherapy, she walked down the aisle with husband No. 3. It lasted one year, she said. It was a nightmare!

So soon he was out, but the business remained. Then in 2000, the cancer made it’s third appearance, milder this time, but still all too present. She is cancer-free today but is still taking oral chemotherapy to stop the cancer from forming. It caused her to gain weight and dragged her through menopause three times, a dizzying ride. She has also settled into her new Milton home, which is spacious and elegant and shared with her fourth husband (and last, she vows), her two children, tow dogs, and a cat. She is barefoot and wearing a casual summer dress with a sparkly pin that reads `model mom.’ She is blonde and very pretty, expertly made up but still fresh and approachable. Her weight gain looks good on her, natural and earthy and warm. She claims not to mind it, but she had liposuction recently to remove fat from her stomach. It made her feel a little bit better.

She has, through all this, learned how to take care of her health. She became an avid student of natural remedies and today takes 30 vitamins and herbs daily. She had reflexology performed on her while she was ill and found it so helpful, she became a practitioner herself. She watches what she eats carefully and never fails to ask older people of her acquaintance what their secret to health is.

Though she had no family history of cancer, she feels stress may have made her vulnerable. She ran her own business, which has grown from taking in $70,000 gross to about $1 million. The revolving door of husbands and boyfriends meant she was mostly a single mom, in charge of keeping a roof over the heads of her kids and herself.

Coming closer to death than most people want to three different times has reshaped her attitude and she gives talks on the change to cancer survivors and sufferers. In words, it basically amounts to `don’t sweat the small stuff.’ But it feels much bigger than that in practice.

“You’ve got to have that positive attitude,” said Nikkanen. She wakes up smiling each day, glad to be there. When bad things happen, she knows it’s just a bump in the road. She takes a longer view. “Back when I was married to husband No. 2, I was probably a little shallow-minded maybe,” she said. Material things mattered to her. Now, “ it’s what you have in your heart. That’s what success is built on.”

She believes that thinking good things will help bring them to fruition. Like her fourth husband, for example. Nikkanen feels comfortable with him and they have things in common.  It is a fourth marriage for both of them and her kids and his son get along well. The couple share an identical birthday – same day, same year. But where she is motivated, ambitious and restless, he encourages her to slow down when she needs to. They balance each other.

“I have a great, wonderful man,” she said. “I just feel very happy and at peace. I know that life is very precious and you never know when the end is going to come. Tell your kids you love them every day. Tell your husband.”

She has learned through trial and error to trust her gut feelings and go with them. She has no time for attitudes and no inclination to get angry at things that don’t matter. And she has learned to say no to demands that are too much for her. She is comfortable putting joy above duty on occasion, packing it all in and heading to the beach.

When people fall ill, she urges them to let people help. Accept their offers. Rest when you are tired. Fighting a life-threatening illness is no time for false pride. But not everything has changed for Nikkanen. She is still driven. She is still the ambitious and precocious child who inherited her show biz flair from her musician father, now living in the United States. And she has maintained the motivation she learned from her strict, Pentecostal grandfather.

She is currently writing a book about her struggle with cancer in the hopes of helping more people than she can reach with her current work with the CCS. But it’s a slow go so far. It’s something of a touchy subject for me, she said. Even through this interview, I can get a little sad inside.

Proof that her training as a child model had worked, it had been impossible to tell. She smiled and laughed throughout, curled up casually in an eggplant-coloured leather chair. But she promises that she lets the emotions come out at other times. I’ll be writing a chapter and I’ll be crying. Said Nikkanen feigning sobs. Then I’ll write more and I’ll start to laugh.

Her three-round fight has not taken away her fear of dying. But she has accomplished what she has wanted to and whenever death happens she will have left a legacy of hard work and laughter behind.

Still, she had a grandfather who lived until he was 103 and then died in his sleep.

That’s her plan too.

September/October 2003
West of the City  By Irene Gentle 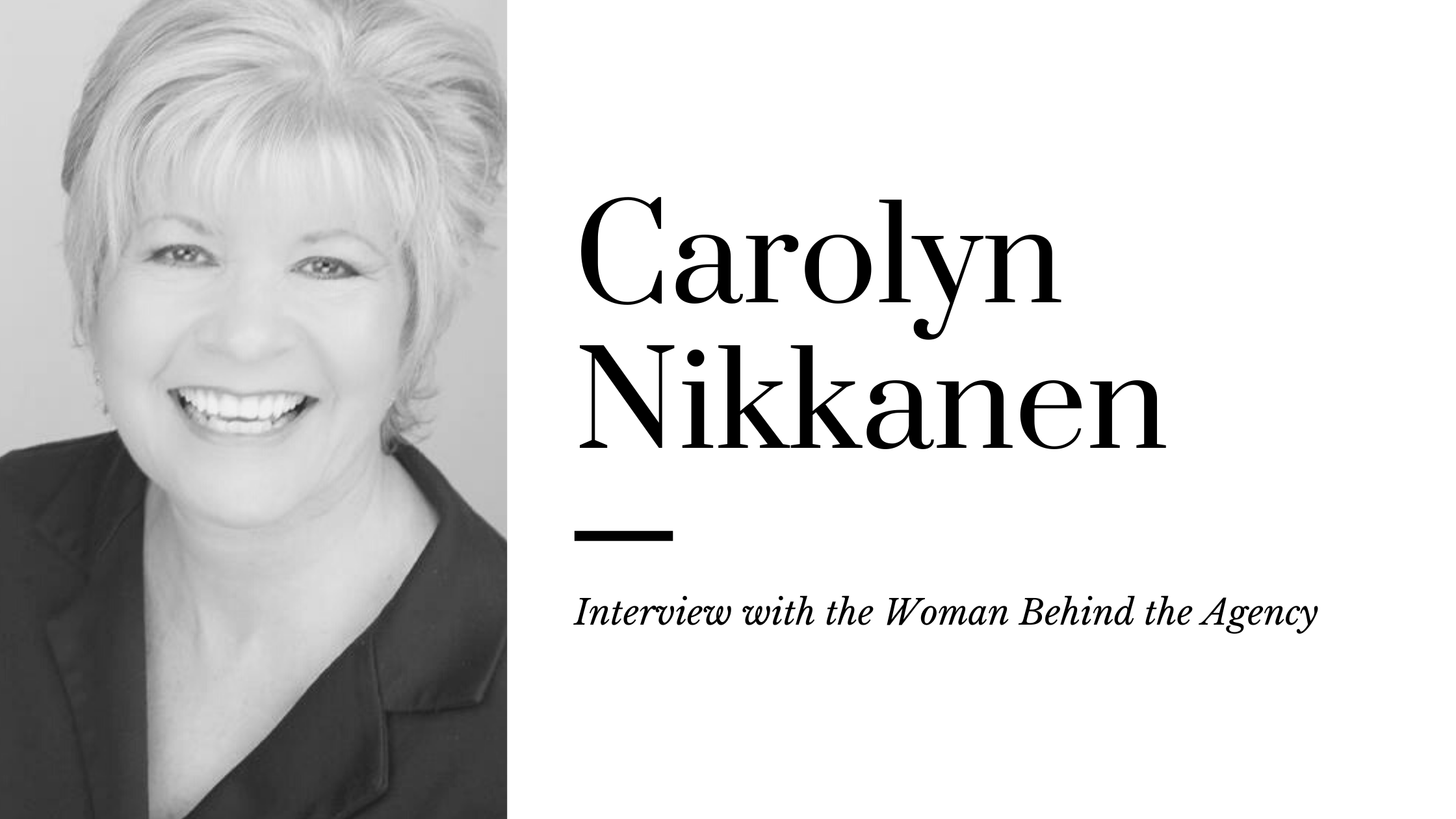 The Woman Behind the Agency

We thought we would take the time to ask Carolyn, the woman behind the agency,… 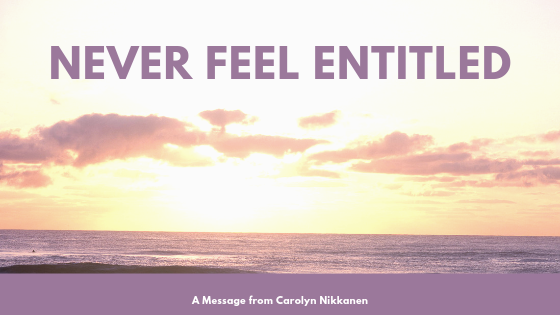 People are always asking Carolyn how she got into the business.  Check out her response…